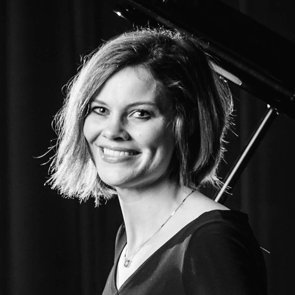 Nikki Eoute lives in Greenville, South Carolina with her husband Philip Eoute and their four children. Nikki holds a B.Mus and M.Mus in voice performance and an M.Mus in choral conducting performance.

Nikki was a founding member of Rivertree Singers, a choral ensemble in the burgeoning South Carolina upstate arts scene, that has twice been featured in Piccolo Spoleto’s Spotlight on Choral Music Series in Charleston, SC. She served on the Rivertree Singers management team, working closely with director and mentor Warren Cook.

Nikki has been a featured soloist in many choral concerts, choral recordings, and has won several awards at the National Association of Teachers in Singing competitions in classical and musical theatre. She works closely with Dan Forrest and Beckenhorst Press. She was also selected as a soloist for Eric Whitacre’s Virtual Choir 4 in 2013 and was considered to audition for the British choral ensemble Voces8. Nikki was the Artistic Director and founder of the Greenville Youth Chorale. She was an adjunct professor at Bob Jones University as a vocal teacher, coach and choral conductor while maintaining a vocal/violin studio at home. She has also participated in masterclasses with Natalie Weiss, a current Broadway coach, singer and recording artist. Nikki is a recurring recording artist for several entities around the country and enjoys adjudicating and providing masterclasses and choral clinics for rising musicians and schools. Nikki’s desire is to give back with what she has been given and is currently starting a homeschool choral and string program in the Greenville area while spending more time writing music and recording.